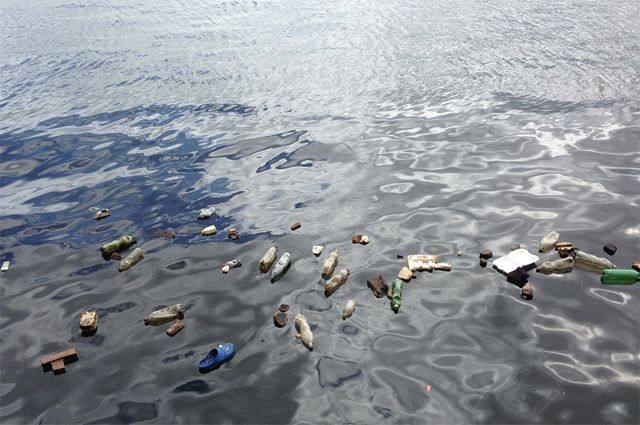 Over 900 million units of garbage get into the water every year. 80% of them & mdash; it's plastic. It got to the point that the waste floating on the surface of the seas and oceans has created an ecosystem that has become home to a number of organisms, including those that have appeared quite recently. Now scientists have made a new discovery: microbes all over the planet & mdash; both in the ground and in the water & mdash; Evolving rapidly to feed on plastic.

It would seem that it is worth rejoicing: you see, bacteria will rid our civilization of the “ plastic curse '' that it itself created. However, not everything is so simple.

The deeper, the more

Five years ago, Japanese researchers studied soil samples from landfills and found in them a bacteria that fed on PET packaging material. Especially for its processing, two enzymes arose and were fixed in the course of natural selection.

Since then, scientists have found a number of enzymes with similar properties, and in 2018, a research team from the United States, based on the discovery of Japanese colleagues, even created an artificial enzyme that could consume plastic 20% more efficiently. Later, the same team developed an even better version of a protein that scientists described as a super enzyme: it can digest waste six times faster!

A new study by specialists from Chalmers Technical University (Sweden) shows that the phenomenon has become widespread: so much plastic has accumulated on the planet, and it has become so ubiquitous that it stimulates microorganisms everywhere to produce enzymes that decompose it. The number of such bacteria is growing all over the world. & Nbsp;

Scientists analyzed the DNA of microorganisms collected in hundreds of regions of the Earth & mdash; both on land and in the ocean. Using computer simulations, they looked for genetic sequences of enzymes that can process plastic. They counted 30 thousand! These enzymes can degrade 10 of the most popular types of plastics in the world.

The researchers then compared the abundance data for these protein compounds with a map of the earth's plastic pollution. Everything coincided. It turned out that the places with the most dense concentration of enzymes are found in those regions where the most of the garbage floats – & mdash; Mediterranean Sea and South Pacific.

“ Using our models, we have confirmed that the potential of the global microbiome to degrade plastic is largely related to plastic contamination sites. This proves that the environment responds to the pressure that we put on it '', & mdash; says Jan Zrimek, one of the authors of the study.

So is it bad or good?

Scientists also noticed that an increased concentration of enzymes that decompose plastic is observed not on the surface of the ocean, but in the depths … This, in their opinion, indicates that this is where microplastic particles mostly float.

The discovered phenomenon of mass mutation of microbes, it would seem, should please us, because there are no ways to save the World Ocean from plastic pollution, and the problem is growing and will face the next generations in full growth. So maybe nature itself will find ways to solve it, giving rise to bacteria in the course of evolution and natural selection that just like to eat plastic? And they will cleanse the Earth of excess plastic?

Environmentalists warn that this phenomenon may have a downside. Firstly, there is no guarantee that gluttonous microorganisms will not get to the plastic that a person needs – & mdash; for example, the one that stores food and drinks. What should be done in this case? Then you have to protect the plastic. Hence the second threat. Packaging makers can invent a material that is more microbial resistant, but it will degrade even longer in the natural environment. Let's say not 300-500 years, as it is now, but 10 thousand years! And the problem of pollution will move to a new level.

What will the “ evolution of waste '' lead to?

Every year, from 8 to 11 million tons of plastic waste are dumped into the waters of the oceans. By 2040, according to experts, this figure may reach 30 million tons. After analyzing 12 million pieces of garbage found in seas, rivers, shores and seabed, an international team of researchers found that almost half of this waste (44%) is associated with takeaway food and drinks.

“ We were shocked to see that bags, bottles, food containers and disposable tableware account for nearly half of man-made waste globally, '' & mdash; explained the head of the study Carmen Morales from the University of Cadiz (Spain). Scientists have come to the conclusion that the pandemic has exacerbated this problem, because all over the world people were forced to give up going to cafes and restaurants and buy ready-made food in stores or in the same take-away cafes.

Moreover, plastic waste has created a new ecosystem in the oceans. It has become home to a variety of organisms & mdash; from marine animals to the very bacteria that eat it. Back in 2013, biologist Linda Amaral-Zettler from the Royal Institute for Marine Research in the Netherlands suggested using the new term & mdash; plastisphere. It denotes a community of organisms living on the surface of plastic debris in the ocean. At first, it included only bacteria and fungi, but gradually scientists began to add new, more and more complex creatures to it & mdash; crabs, jellyfish, snails. All these species are united by the fact that they attach to plastic and live on it, spreading over the vast area of ​​the World Ocean. The mechanisms of their reproduction and nutrition are adapted specifically to the plastic environment.

After examining the waste floating on the surface of the oceans, a group of American and Canadian biologists found that some of the organisms living on them are relatively recent, and for the rest of the inhabitants of the seas they are a kind of “ aliens ''. & mdash; completely alien and sometimes hostile species.

“They discovered a way to use floating debris as transport across the ocean,” & mdash; says research leader, biologist Lindy Haram . & mdash; During the months and years that they spend in a drift of 6 thousand kilometers, these organisms acquire properties unknown to their ancestors. By the time they, along with the current, reach the opposite bank, their descendants are already a completely new biological species. '' They had never encountered such a phenomenon before, and they cannot yet predict its consequences. Perhaps the food chains that have formed in the ocean for millennia will be destroyed. Or maybe 'plastic' the species will start a war of extermination and displace their traditional fauna from marine communities.