After the visit of Secretary of State Blinken and Secretary of Defense Austin to Kyiv, Russian Ambassador to Washington Antonov sent a threatening note to the State Department demanding to stop supplies of American weapons to Ukraine. I sent it – but I could well have spent this time on something else like playing chess or backgammon. The effect would be exactly the same, or rather, none. 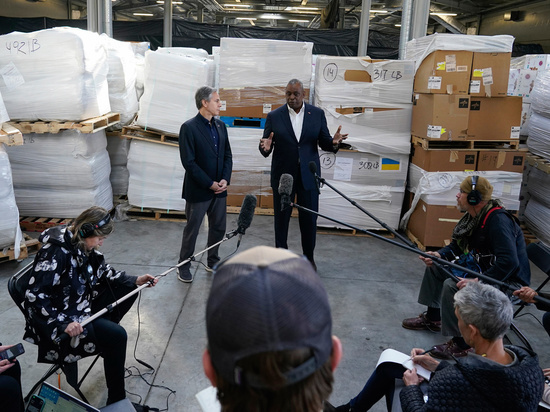 Secretary of State Anthony Blinken and US Secretary of Defense Lloyd Austin told reporters about their visit to Kyiv only after it ended, when they were already in Poland. Photo: AP

And these are not my “speculations and fabrications.” These are the conclusions that follow directly from other statements by Ambassador Antonov: representatives of the State Department refuse to meet with him, and when he tries to communicate with them at least in epistolary form, “letters do not reach the addressees.”

The Russian Embassy in the United States has become a rare curiosity in the history of international relations: a diplomatic mission that has lost its host country. Washington is now determined to speak with Moscow only in the language of force, although not directly, but through such an “ideal interpreter” as the regime of Ukrainian President Vladimir Zelensky.

We don't know exactly what Zelensky talked about with Austin and Blinken during the confidential part of their talks. But this can be guessed with a very high degree of certainty: “You have a product, we have a merchant. You have a girl, we have a good fellow. America is ready to supply Ukraine with the maximum number of weapons for immediate use against the Russian armed forces. Zelenskiy has a desire to ensure such immediate use. Dot. There is not much more to talk about here – unless, of course, you are the Russian ambassador to the United States, who needs to continue to work, even if this “work” in terms of efficiency practically does not differ from the exploits of Sisyphus.

America made her choice. Zelensky has made his choice. It remains to be seen how and with what exactly the Kremlin will respond to this choice.

In part, of course, such an understanding already exists. On the eve of the visit of “dear American guests” to Kyiv, the Russian side made a lot of not quite official, but quite convincing hints that many of today's Ukrainian regions should turn into “people's republics.” However, such declarations of intent can come true only in the event of a powerful and successful offensive by the Russian army, coupled with knocking out a significant amount of territory from Kyiv's control.

So far, there has been no such attack. For now, there is a pause that Biden is trying to fill with flashy gestures like appointing a new US ambassador to Ukraine and returning the US diplomatic mission to Kyiv. All this is intended to demonstrate the confidence of the American side that the conflict in Ukraine is developing in a favorable direction for it. But is this confidence based on something significant? Sorry for the tautology, but I have no confidence in this. After all, Putin has not yet taken his next decisive step.

But here's what I have confidence in: the prospects for a diplomatic and political settlement in Ukraine are becoming even more illusory than they were before. The Ukrainian political elite has long perceived Crimea and Donbass as a “cut off piece.” But is it ready to transfer other territories into the same category, where “people's republics” may arise? What should happen in order for the President of Ukraine (any, not necessarily Zelensky) to sign an agreement recognizing this fact, and for the Parliament of Ukraine to ratify it? My ability as a political analyst is not currently sufficient to formulate any convincing answer to this question.

Suppose, in a series of new political formations, the “Kyiv People's Republic” will also appear. But what's next? What remains is Western Ukraine, a territory whose population was hostile to Russia even during the heyday of the Soviet Union.

I have no doubt that Putin has a plan to solve this problem. However, if he shared this plan with someone, it was only with his closest political circle. Everyone else has only to wait, guess and read with anxiety, for example, the following entries in the telegram channels of the governors of our regions (in this case, we are talking about Roman Starovoit from the Kursk region): shot down 2 Ukrainian drones. There are no casualties, injuries or damage. The situation is completely under control.”

At this point, I finally ran out of words. I want to say a lot more, but I can't. Probably, the whole point is that I am not Ambassador Antonov with his ability to never lose heart and even at such moments to issue, for example, the following maxims: if only they would stabilize, which is what we want now, not only would they collapse, but develop. There is a potential for this.”

Absolutely, dear Comrade Ambassador? Bring me glasses then, please. However, I have never worn them in my life. But now I feel like I can't do without them. Or not, bring a microscope right away! I really want to see this very “potential!”