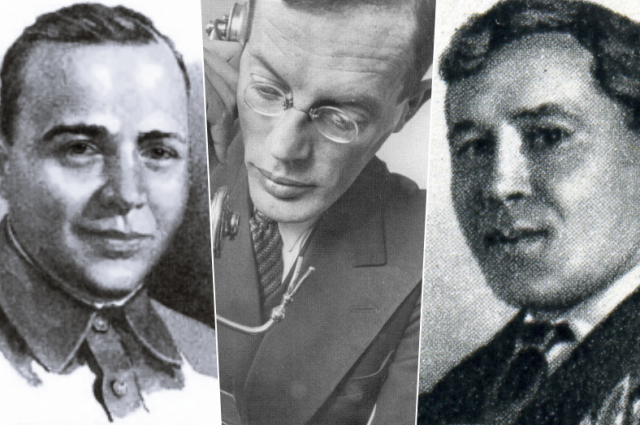 The word of a journalist was a powerful weapon 80 years ago, during the clash with Nitler's Germany. Therefore, from the first days of the war, the best journalists, writers and poets of the Land of the Soviets went to the front as war correspondents.

«Reporter will die — no trouble»

Konstantin Simonov, who himself went through the roads of the war in this role, wrote in the “Song of Frontline Correspondents”:

Simonov's original had a harsher line: “The reporter will die “— not trouble". The poet knew what he was talking about: in battles, on which the fate of the country depended, often did not care the fate of the stubborn climbing on forefront for the sake of a few lines».

According  According to estimates, about 1,500 journalists did not return from the fronts of the Great Patriotic War. Among the fallen were names that thundered throughout the country.

The author of “Chuk and” Gek “,” Timur and “his team”, who fought back in the “Civil War”, on the front in “1941, had every right not to go according to” medical indications. But a month after the start of the war, he left for the army in as a correspondent for Komsomolskaya Pravda.

Combat Commander Ivan Prudnikov, the hero of one of Gaidar's front-line essays, remember — the writer, together with the 6th company of his battalion, personally participated in the attack on the Germans, having obtained a captured machine gun in the battle. Other eyewitnesses add — front-line correspondent Gaidar participated in battles with fascists more than once.

The defense of Kyiv ended for the Red Army with a heavy defeat, encirclement and the defeat of a huge group of troops. On the eve of leaving the city, on September 18, 1941, a group of correspondents from central publications were taken out by plane. Gaidar, who felt more like a soldier than a journalist, refused to leave. Together with the workers of the political department of the 37th Army, Gaidar crossed to the right bank of the Dnieper. When the encirclement met the partisan detachment, the writer decided to stay in it as a machine gunner.

October 26, 1941, near the village of Leplyavo in the Cherkasy region, a group of partisans stumbled upon an ambush of the Nazis. Gaidar, who noticed the enemy first, managed to give a signal, thanks to which the group managed to leave. But he himself died from an enemy bullet.

One of  co-authors of “The Twelve Chairs” and "Golden Calf" already in the summer of 1941 he went to the front as a correspondent, sending materials to "Pravda", "Izvestia","Red Star" and other publications. Even the resulting concussion did not stop him. Colleagues recalled that Petrov always walked along the edge of death.

In the summer of 1942, he obtained permission for a business trip to the besieged Sevastopol, which was in a critical situation. Leaving, he borrowed a raincoat from Konstantin Simonov, joking: “Either we will both return safe, or no one.”

Petrov somehow miraculously survived the bombing of the city, survived the evacuation on a warship attacked Nazi aviation, having reached Novorossiysk alive. But  2 July 1942, while returning to Moscow, the plane, on board of which Petrov was, crashed, leaving the Nazi fighters. His last unfinished essay was found in a field bag… Executive Secretary of the Union of Writers of the Tatar ASSR Musa Jaliloriginally went to the front as a private. At this time, in Kazan, the premiere of the opera "Altynchech", the libretto to which was written by Jalil, took place. The writer was released on leave, and he came to theater in military uniform. After that, the command of the unit found out what kind of fighter they serve.

They wanted to demobilize Jalil or leave him in the rear, but he himself resisted attempts to save him: “My place” & mdash; among the fighters. I should be at the front and beat the fascists». As a result, in early 1942, Jalil went to the Leningrad Front as an employee of the front-line newspaper Courage. He spent a lot of time at the front line, collecting material necessary for publications, and carrying out instructions from the command.

In the spring of 1942, senior political instructor Jalil was among the fighters and commanders of the Second Shock Army who fell into the Nazi encirclement. On June 26, he was wounded and captured. There were different people in the POW camp — someone lost heart, broke down, and someone burned with a desire to continue the fight. From among these, an underground anti-fascist committee was formed, of which Musa became a member. The underground merged into the  Idel-Ural legion created by the Nazis from the number of prisoners of war, hoping then to raise an armed uprising. The effectiveness of the underground was incredible. Legion “Idel-Ural” and not became a full-fledged combat unit. His battalions raised uprisings and went to the partisans, legionnaires deserted in groups and singly, trying to get to the location of the Red Army units. Where the Nazis managed to prevent a direct rebellion, things were also not going well — German commanders reported that the soldiers of the legion were not in a condition to conduct combat operations. As a result, the legionnaires from the Eastern Front were transferred to the West, where they also did not really show themselves.

However, the Gestapo was also not dozing. The underground workers were identified, and in August 1943, all the leaders of the underground organization, including Musa Jalil, were arrested. This happened just a few days before the start of the general uprising of the Idel-Ural legion.

In the dungeons of the Berlin prison, Moabit Musa wrote his last works, which years later will become known as the "Moabit Notebook".

No, you lie, executioner, I won kneel
At least throw it into dungeons, at least sell it into slaves!
I will die standing, not asking for forgiveness,
At least chop my head with an ax!
I am sorry that those who are related to you,
Not a thousand — I only exterminated a hundred.
For this of my people
I asked forgiveness on my knees.

25 August 1944, Musa Jalil was executed on  guillotine in  Plötzensee prison.