Russian army engineering troops deployed UR-77 Meteorit self-propelled rocket-propelled mine clearing systems in Ukraine. Footage of this powerful weapon has been posted online. The installation, nicknamed the “Snake Gorynych” for its characteristic fire shaft, was used during the clashes in Rubizhnoye.

Initially, the UR-77 was created to make passages in minefields. But in a combat situation, it is rarely used for its intended purpose. The Russian military most often uses it to destroy enemy fortifications in urban battles. 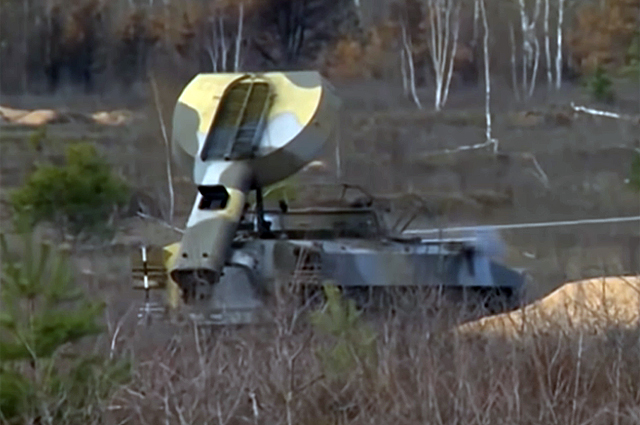 UR-77 “Meteorite”. Photo: Frame from video

The official name of this combat vehicle — UR-77 “Meteorite”. This is a Soviet self-propelled mine-clearing rocket launcher, whose production began in 1977, and it is still the main machine of this type in the engineering troops. The installation consists of a basic tracked vehicle, created on the basis of the 2S1 Gvozdika self-propelled howitzer, a launcher and an ammunition load of two demining charges.

Demining is carried out by creating a powerful shock wave from the explosion of the charge, which affects the mine fuses. Special charges are used to make a passage in a minefield. Each of them is a nylon shell with a diameter of 7 cm and a length of 93 m, filled with plastic explosive, inside which a detonating cable passes. Ammunition different in weight — UZ-67 (655 kg), UZP-77 (725 kg) and ZRSh — checkered demining charge (41 kg). The throwing of these oversized charges into the minefield is done with the help of special powder rockets, towing the demining charge to the destination.

Ammunition is placed in a special compartment UR-77 and one of the ends is attached to the rocket, the other end to the brake rope, which regulates the distance of the shot. The launcher has special guides along which the charge is ejected. Then two rocket engines pull hoses with explosives behind them. The flight of the ammunition takes place at a height of 10-15 meters, at the last stage a brake rope is pulled, connecting the hose with explosives. Throughout the flight, the rockets make a characteristic sound, similar to a loud rustling. At the end of the active part of the flight path, the decoupling device is activated, after which the projectile falls to the ground, and the machine backs up to align the hose, thus it occupies the largest area. Then, using a special control panel, an impulse is given to detonate the charge, which undermines the explosive. The time from lifting the guides to undermining is 3-5 minutes.

Firing range is 500 meters. The dimensions of the passage being made in the minefield: width — fourteen; length — 80-90 meters.

The maximum speed of the combat vehicle — 60 km/h, cruising range — 500 km, it is also able to overcome water obstacles.

To ensure the operation of the UR-77, two crew members are required — driver and operator commander. After firing two shots UR-77 is sent to the base for reloading, which takes 30–40 minutes.

UR-77 with its powerful explosives does not guarantee complete clearance of the area. Mines with double-click fuses and anti-personnel mines of tension action may remain intact. Magnetic, seismic and infrared fuses do not react to the blast wave.

The outdated UR-77 should replace the new model — UR-15. An experimental vehicle built on the basis of the BMP-3 infantry fighting vehicle was used for the first time during the Kavkaz-2020 military exercises. There is no data about its characteristics in the public domain.

Currently, the UR-77 is in service with units and units of the engineering troops of the armed forces of the countries of the former Soviet Union and the former countries — members of the Warsaw Pact. The combat use of the systems was recorded during the Chechen campaigns, where they were used by federal troops. The systems were also used as strike weapons in Syria and Ukraine.

In the USA, the M58 MICLIC (MineClearingLineCharge) remote demining system was created in the USA to make passages in minefields by explosive means. The system is capable of making a passage in a minefield up to 6-14 meters wide and up to 100 meters long. The unit is transported on wheeled or wheeled-caterpillar trailers. Now the M58 MICLIC remote demining system is being installed on the Assault Breacher Vehicle (ABV) combat vehicle, created on the basis of the M1Abrams tank. The main disadvantage of the foreign mine clearance system M58 MICLIC is a very small launch range — only 67 m.