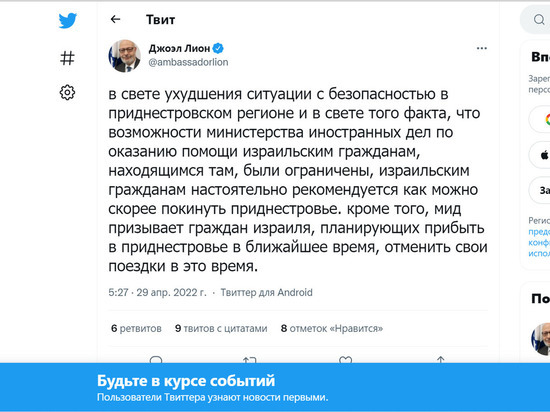 The Israeli Foreign Ministry “strongly recommends” the citizens of this country to leave Transnistria “as soon as possible”. On behalf of the Ministry of Foreign Affairs, Israeli Ambassador to Ukraine Yoel Lion posted such an appeal on his Twitter page.

The Foreign Ministry, in its statement, speaks of the “deterioration of the security situation in Pridnestrovie”, as well as that “opportunities The Ministry of Foreign Affairs to provide assistance to Israeli citizens living there [in Transnistria] is limited.”

Also, the Ministry of Foreign Affairs called on Israeli citizens to cancel all trips to the Pridnestrovian Moldavian Republic in the near future.

Recall – the authorities On April 25, the PMR introduced an increased “red” level of terrorist threat in the republic after three terrorist attacks that occurred on the territory of Pridnestrovie. On Monday, April 25, unknown people fired grenade launchers at the building of the Ministry of State Security of the unrecognized PMR in Tiraspol. On Tuesday, the Ministry of Internal Affairs reported two explosions in the village of Mayak, Grigoriopol District, as a result of which two of the most powerful antennas of the radio center, which broadcast Russian radio, were disabled. Explosions also took place in a military unit near the village of Parkany.