There is a mass exodus of the male population in Ukraine. More than 432,000 men have left for Poland alone, despite the travel ban, since the start of the special operation. “MK” conducted an experiment and found out that any owner of free six thousand euros and who knows how to deftly give “on the paw” to border guards can still leave Ukraine for European countries. 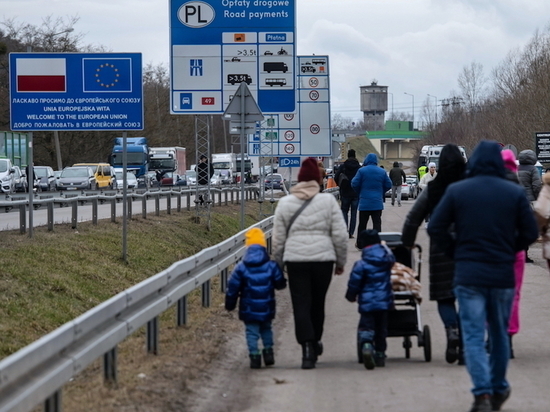 In Poland, they began to sound the alarm: too many suspicious male refugees from Ukraine cross the border without hindrance.

In Poland itself, they are shocked by the extent of corruption at border points.

“The level of corruption and the opacity of the system is much higher than one can imagine. And it is massive. I remember a man who fled to Poland with the eight children of his soldier brother. But he had permission to leave,” said former Polish Minister of National Defense Tomasz Semoniak.

According to him, men of this category do not register in a new country and are even ready to refuse material assistance, as they are afraid that they will be identified and returned to Ukraine. In Poland, they only shrug their shoulders, saying that all responsibility lies with the border service of Ukraine, which turns a blind eye to the departure of men of military age.

By the way, the other day the SBU detained a group of corrupt border guards who received from 3 to 5 thousand dollars for the unimpeded passage of the border by men of military age from 18 to 60 years. But it seems that the profitable business is still alive.

We decided to check how realistic it is for a potential soldier to leave Poland. It didn’t take long to look for announcements – all chat rooms for Polish refugees are full of announcements that guarantee unhindered passage of the border. However, to test how this option works, we come up with a “legend” and contact an “entrepreneur” from Odessa.

– There are two options. One with documents, which costs 400 euros. We will make documents for three children in Europe. And you yourself will cross the border.

– This is a pretty reliable option. The presence of children is a reason to release a man even of military age. I've had so many men.

– We can do more. But it will already look suspicious. Do you need it?

– There is such an option not to bathe. It costs 6 thousand euros. No prepayments.

– Part of the money – 2.5 thousand euros, pay directly at the border.

– I'll tell you everything, don't worry, you'll know who to give. Crossing in the Odessa region.

– The rest of the money is for me.

– No, I work through the secure transactions system. Before crossing the border, “fill in” 3.5 thousand in “Garant” (a popular system promises safe financial transactions. – “MK”). This is before the border. After you successfully communicate with the border guard, “release” the money from the “Guarantor”. And that's it, you're there.

– The second option is the most reliable. Yes, the money is big, but you don't lose anything even if you can't get through the border. There is no risk. Imagine if everything went wrong – the border guard was not given money, then you just take the money from the “Guarantor” and that's it.

It seems that all the attempts of the Kyiv authorities to contain the wave Ukrainian armies do not work as long as there is demand and local unscrupulous businessmen.

Meanwhile, President of Ukraine Volodymyr Zelensky did not support the petition in which he was asked to lift the ban on leaving Ukraine for men from 18 to 60 years old, the corresponding answer was published on his website. And the first lady of Ukraine joined the agitation of women to join the ranks of the Ukrainian army. In a number of regions of Ukraine, the mobilization of women who are registered with the military has been announced.