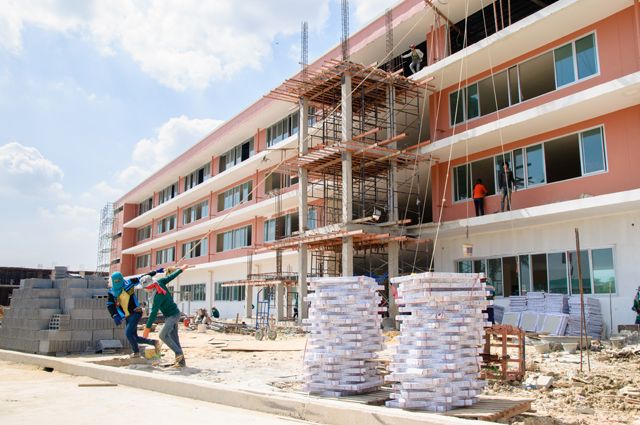 Over the past ten years, the number of residents of the Krasnodar Territory has almost doubled. Families with children from all regions of Russia move here. Of course, the question of the distribution of schoolchildren and the construction of new educational institutions is now a priority for the Kuban authorities. In 2022, schools in the region should accept more than 80,000 first-graders. And the active participation of the administration in the national project “Education” helps to cope with this task. We tell you what results have already been achieved.

“Now we are accepting applications from the parents of future first-graders, including from residents of the Donetsk and Lugansk People's Republics who moved to the Kuban. We expect that in total this year, for the first time, more than 80,000 children will sit at their desks. Krasnodar Territory — an attractive region for living, every year tens of thousands of people from all over the country come to us. Therefore, we pay special attention to the construction of social facilities. Over the past six years, over 60 schools have been opened, — told Governor of the Krasnodar Territory Veniamin Kondratiev.

Now 37 schools are being built in the region at the same time, 27 of which — on national projects. 17 objects are planned to be commissioned this year. In Krasnodar, according to the national project, seven schools with a total capacity of 8600 places are being prepared. Work on construction sites began at the end of 2021.

“We are building schools where there is a particularly acute shortage of social facilities today. In the villages of Znamensky, Rossiysky, Fertile, as well as in the area of ​​the Western bypass, Central and Kuban districts. This will help reduce the burden on existing educational institutions, », — explained by Veniamin Kondratiev.

Four new schools will open by the first of September. All conditions are provided in the institutions, specialized classes for labor, physics, chemistry, computer science lessons, which are equipped with special equipment, have been created. There is a place for practicing various sports — right up to gymnastics and choreography.

“These are very important facilities for microdistricts, because the population has grown significantly in recent years, respectively, and the need for school places is extremely high,” — noted vice-governor Anna Minkova.

What about in the districts?

New schools are being built in many municipalities of the region. For example, a school for 1,100 students will be built in the village of Tbilisskaya. It will be erected to replace the emergency facility. The construction is planned to be completed in 2023. The school will house a library, a museum, a gym, doctor's offices, a speech therapist, aesthetics, and a dance studio. Large gym with changing rooms, showers, workshops for processing wood, metal and fabrics with modern equipment. Two assembly halls for 675 seats, a stage, separate artistic rooms for boys and girls, and rooms for storing costumes are also planned. There will be several areas for outdoor games and recreation on the territory of the school.

“According to the plan, all facilities should be completed this year. The people are waiting for them. Measures must be taken promptly to keep up with schedules and complete all work on time, — said Vice Governor of the Krasnodar Territory Evgeny Naumov.

Near Novorossiysk, on the territory of school No. 28 in Tsemdolin, also under the national project, they continue to build an elementary school building for 400 seats.

“We are investing heavily in creating an educational environment. And in the new economic conditions, not a single social construction project was stopped. We expect that the new building will appear in Tsemdolin by the end of the year and will unload the main building, — said Veniamin Kondratiev.

The building will be a separate three-story building. A sports area and utility facilities will appear on the territory adjacent to the building. The sports ground will include a gymnasium, volleyball and basketball courts, a mini-football field.

Another promising direction of the national project — is the creation of “Points of Growth” in schools that are located in rural areas and small towns of the region. Starting from the new academic year, 136 centers of the natural science and technology profile will be launched in the Kuban. In addition, the region is among the leaders in the country. Today there are 329 such laboratories. Since 2019, more than 160,000 children have been able to get an education in the new conditions. By the end of 2024, they plan to organize the work of 782 “Points of Growth”.

Schoolchildren in the most remote settlements study programs in science and technology subjects, receive additional education, learn to play chess or create videos, presentations and mini-movies. The classrooms are equipped with digital laboratories in physics, chemistry, and biology. The set of equipment for each school includes laptops, microscopes, robotics kits and construction robots. About 213 million rubles were allocated to upgrade the material and technical base of organizations in 2022.

“The children's eyes burn, even in our small school, students want to receive knowledge at a high level, many graduates then enter Kuban universities. Every year, future chemists, biologists, plant growers come out of our walls. And the national project helps them in this, — said principal of school No. 10 in the village of Girey, Gulkevichsky district, Valentina Oleinikova.

By the way, the opening of “Points of Growth” It also involves retraining teachers, improving their qualifications.

To future IT specialists

From September, the IT-cube digital education center will start working at a school in the small town of Timashevsk. (the fourth in the region), it will also be opened thanks to the national project. 17.4 million rubles are planned for material and technical equipment. Schoolchildren will be introduced to the basics of programming and Internet technologies, they will be taught how to develop mobile applications, design and control robots.

“For the Krasnodar Territory, the project is becoming another point in the development of information technologies in the system of additional education for children. Students who dream of a career as a programmer or game developer will be able to study here for free, — told Minister of Education, Science and Youth Policy of the Region Elena Vorobyeva.

Three such centers are already operating in the Regional Palace of Creativity in Krasnodar, in the Center for Creative Development and Humanitarian Education in Sochi, as well as in Krasnodar Gymnasium No. 87 .

23 modern laboratories will be equipped this year in 17 colleges and technical schools of the Kuban. In 2021, 24 similar workshops have already been opened in 12 professional educational organizations. In total, since the beginning of the implementation of the national project “Education” 54 laboratories were created in 34 institutions in the region, 451 new workplaces were equipped in them. and Mobile Robotics. Mechatronics technicians for food production will be trained there. Novorossiysk College of Construction and Economics will open workshops in the field of “Construction”. They will train more than a thousand students in six specialties. During the academic year, career guidance events will be held there for schoolchildren, where children will be able to learn their first profession.

All equipment meets international standards and will make it possible to accredit the demonstration exam site. Employers and experts participate in the conduct of such an exam, and students receive a competency passport, which confirms the level of proficiency in professional skills in accordance with national, international and corporate standards.