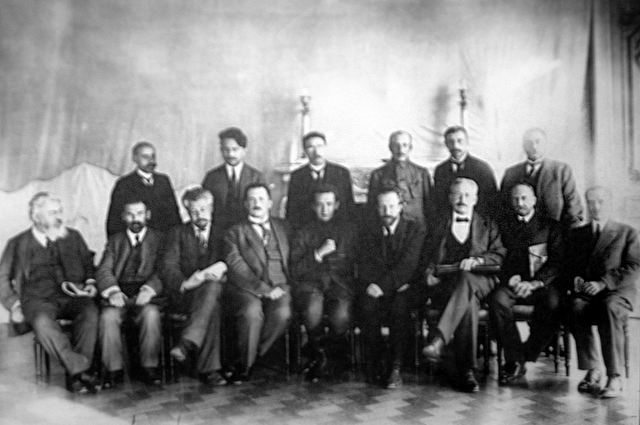 In August 1917, the second Provisional Coalition Government of Alexander Kerensky was formed. History let go of this government only three months of life. But here's the question: could could it have become permanent if history had turned out differently?

Immediately just after the victory of the February Revolution in Russia there was a dual power. The Soviets of Workers' and Soldiers' Deputies had massive support, and the Provisional Government — formal power. «Power without power and strength without power» — Prince Lvov spoke about the situation in the country.

In difference from the first "bourgeois" composition of the Provisional Government, its second, coalition structure could conditionally be called “socialist”. It included 5 Socialist-Revolutionaries, 2 Mensheviks, 2 Radical Democrats, 2 non-party and 4 Cadets. The All-Russian Central Executive Committee of the Soviets of Workers' and Soldiers' Deputies recognized this government and gave Kerensky unlimited powers.

Kerensky was very popular. He was called “the son of freedom”, “the first love of the revolution”, “the people's sun”. He was an excellent orator, he knew how to speak and loved, and he never prepared speeches in advance. He himself admitted: “When I speak, I don’t know what I’ll say. And when I came, I don't remember what I said». A very convenient position for a politician… Having destroyed the army with his actions, having killed the authority of the officers and the high command, nevertheless Alexander Fyodorovich Kerensky tried to appear as a formidable, demonic and ascetic leader. He quickly changed his civilian suit for french and breeches. And as whatever it it but outwardly wittingly or unwittingly tried to resemble Napoleon, which caused a storm of ridicule.

Kerensky and other ministers of his government clearly underestimated the Bolshevik threat. The Bolsheviks were preparing an armed uprising almost openly. Even when Lenin's comrades-in-arms in Kamenev, who believed that the armed uprising was doomed to  failure, expressed their thoughts in  letter "To the current moment", which was published in the "Novaya Zhizn" . In the end, it took the rebels a little more than a day to capture Petrograd.

Could the Provisional Government resist? Quite if entered into a strong alliance with General Kornilov.

Lavr Kornilov became commander-in-chief back in July 1917  By the way, this post was recommended bySocialist-Revolutionary and militant Boris Savinkov, former Deputy Minister of War Kerensky. Alexander Fedorovich himself agreed to return the death penalty to the army and the power of officers instead of soldiers' councils. In a short time, the new commander-in-chief restored order and restored the front. Bolshevik agitation and fraternization with the Germans ceased, relative stability set in.

Kerensky and Kornilov agreed in the desire to disperse the Soviets. However, Alexander Fedorovich, who was losing popularity, was afraid to finally lose his political face and be branded as a strangler of freedom. But he was even more afraid that Kornilov, together with the Soviets, would overthrow the Provisional Government. Therefore, the cautious Kerensky, just in case, kept in constant contact with the Petrograd Soviet. When the Cossack corps moved to Petrograd, Kerensky turned to the Bolsheviks for help. Moreover, the “leader of Russian democracy” ordered to issue 40 thousand rifles to the latter, which soon will be able to successfully use when he is overthrown.

Lenin's neighbor in the hut, Zinoviev, recalled that Lenin, returning to Petrograd in 1917, was sure of his arrest, but met with an enthusiastic reception. And after all, they could easily have been shot as a German spy! However, even during the July events of 1917, the active search for Lenin lasted only 3 days, and he managed to escape from Petrograd.

The Provisional Government could maintain if if had guessed to change the slogan “War before    victorious end! to  the slogan “Peace to huts, war to palaces!” successfully thrown by the Bolsheviks to the masses… But it really wanted to be temporary. Kerensky himself considered the transfer of all power to the Constituent Assembly as the main task. Already someone, but he was a dictator. Rather a dreamer, which is very risky in politics. In difference from the so-called "Kremlin dreamer" Lenin, who did not hesitate to seize power. Kerensky considered the word, and not "a"man with"a gun", the main weapon of the politician. And in lost in the end.